St. Spyridon is one of the most beloved saints of the Orthodox Church. He was born in 270 in Askeia, Cyprus, where he worked as a shepherd and was known for his great piety. He married and had a daughter, Irene. Upon the death of his wife, he entered a monastery, and his daughter, a convent.

Eventually, he became Bishop of Trimythous, in the district of Larnaca, Cyprus, during the reign of Constantine the Great. Taking part in the First Ecumenical Council of Nicaea in 325, he countered the arguments of Arius and his followers. He attempted to explain the doctrine of the Holy Trinity, by using a potshard (some accounts say a brick), to illustrate how one single entity (a piece of pottery) could be composed of three unique entities (fire, water, and clay).  As soon as he finished speaking, it is said that the shard burst into flame, water dripped on the ground, and only dust remained in his hand. So it is that in the Holy Trinity there are three persons, but only one God.

After the Council, Bishop Spyridon returned to his diocese in Trimythous, where he died peacefully in 348. When the Saracens took Cyprus, his body was disinterred and taken to Constantinople. The relics were found to be incorrupt, and contained sprigs of basil, both of which were taken to be signs of divine sanctity.

When Constantinople fell to the Ottomans in 1453, St. Spyridon’s relics were removed one last time to the island of Kerkyra (Corfu), where they remain in the St. Spyridon Church to this day, and after 1500 years, still remain incorrupt.

His icon often depicts him vested as a bishop, holding a Gospel Book in one hand and in the other, a flame, dirt, and water dripping. Instead of a bishop’s miter, he wears a woven, straw hat, a traditional shepherd’s hat; a representation that he was a shepherd of the people.

By divine grace, St. Spyridon wrought such great wonders that he received the name “Wonderworker.”  He is also known as the “walking saint” because the slippers which clothe the feet of his relics wear out each year from his travels to help people, and are replaced each year on his feast day.  These slippers have been known to work miracles through the prayers of St. Spyridon. We are blessed to have a pair of these slippers at our church. 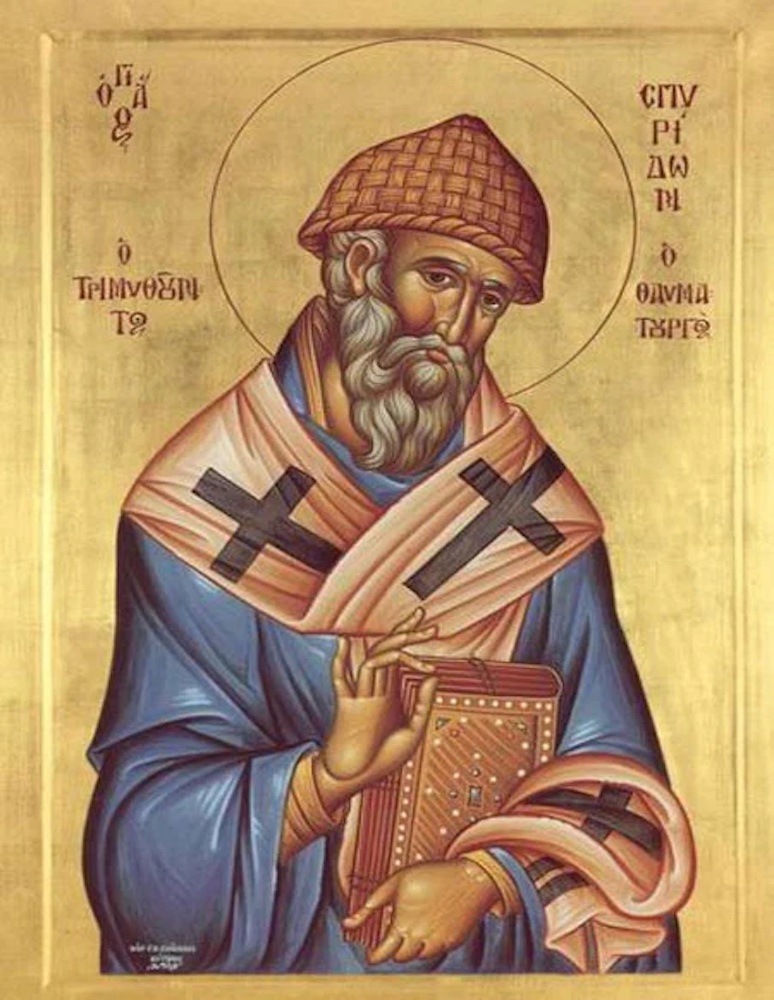 Visit the Metropolis of Pittsburgh